D-NOSES aims to introduce a more balanced, bottom-up approach to odour governance using Citizen Science as a way to bridge existing regulatory gaps. Local, regional, national and even international authorities have an important role to play in this effort, paving the way for citizens to take responsibility for their own environment. One of the instruments to help with this is a our Policy Brief, which outlines the problem and explains how D-NOSES can be applied to resolve it.

Read on below to find out more about the Policy Brief and how it can help improve odour governance. Or you can jump into action and click to download the policy brief on the right, made available in several different languages. 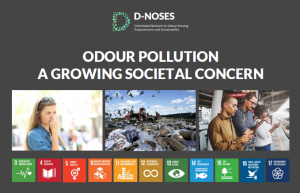 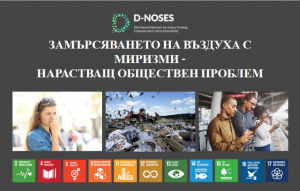 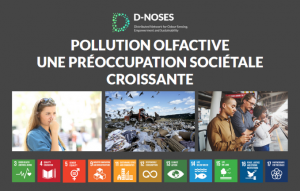 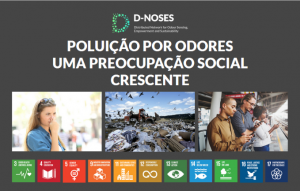 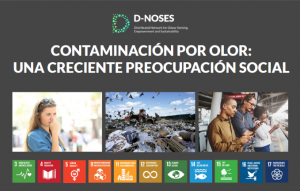 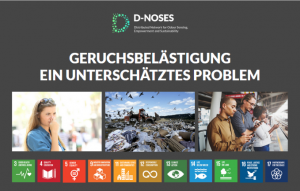 Odour pollution is a growing problem …

As cities continue to grow, the space between industry, agricultural facilities, and residential areas is decreasing. This exposes an increasing number of citizens to recurring odour pollution. In fact, odour pollution is the second leading reason for environmental complaints in Europe (Dunod 2005). Despite this, regulation is insufficient at best and, in many European areas, environmental regulations ignore odour issues completely.

Odour pollution is not a recent issue. Many publications in the late 1990’s and early 2000’s have dealt with odour issues and proposed new mathematical models to calculate the dispersion of emissions from the source. This should have helped to protect communities at the planning and environmental permit stage. Considering the number of odour complaints, this has not had the desired effect. While there may be many reasons for this, we believe one of the main ones is the fact that most of the methods in use today are still focused on odour levels and do not measure impact on people directly.

More recently, scientific reviews of existing odour regulations have alerted to the lack of a common definition and approach. Even with this evidence, change is slow or non-existent. The lack of standardised regulations and, in some cases, complete lack of oversight is mainly due to three factors:

What can be done?

D-NOSES aims to provide an inclusive approach to tackling odour issues. It will address the three issues mentioned above by:

And what if we don’t?

While the status quo is due to the persistent belief that odour are a mere nuisance, there is growing evidence that it can have significant effects. In fact, some studies have shown that persistent exposure to bad odours can affect people’s health, causing coughs, headaches and nausea among other symptoms. This, in combination with the potential social and economic effects, paints a grim picture of the future of affected communities and will undoubtedly keep on causing conflicts, as it already does in many areas. As cities continue to grow, the likelihood is that encroachment (the expansion of urban and industrial areas towards each other) will generate an increasing number of conflict areas.

Somebody should do something …!

But who? At D-NOSES we don’t want to prescribe a one-size-fits-all solution for the many possible problems that occur. Instead, we believe that each problem should have its own solution. What is needed is not necessarily new burdensome regulations, but a framework that allows citizens and all stakeholders to work together towards a balanced solution.

The complexity of the odour pollution question can make it difficult for stakeholders to fully grasp the issues. To support local decision-makers, emitting industries, and affected citizens in understanding the key facts, D-NOSES has published a policy brief entitled “Odour pollution – A growing societal concern”. The aim is to give readers a short, four-page introduction to the issues and explain the practical value of the proposed D-NOSES solution. This should raise awareness of odour pollution and provide all stakeholders with the necessary background knowledge to think about how they can engage in productive dialogues and effective co-created solutions.

D6.3. DIY guidelines
D2.5 Compilation of good practices in odour pollution 2
D2.6 Review on odour pollution and its relationship with chemical compounds and health issues
D6.2 Standardizing the monitoring odour pollution through citizen science
D2.4 Analysis of existing regulation in odour pollution, odour impact criteria 2
DNOSES.StrategicRoadmap
This website uses cookies to improve your experience. We'll assume you're ok with this, but you can opt-out if you wish. Accept Read More
Privacy & Cookies Policy

This website uses cookies to improve your experience while you navigate through the website. Out of these, the cookies that are categorized as necessary are stored on your browser as they are essential for the working of basic functionalities of the website. We also use third-party cookies that help us analyze and understand how you use this website. These cookies will be stored in your browser only with your consent. You also have the option to opt-out of these cookies. But opting out of some of these cookies may affect your browsing experience.
Necessary Always Enabled
Necessary cookies are absolutely essential for the website to function properly. This category only includes cookies that ensures basic functionalities and security features of the website. These cookies do not store any personal information.
Non-necessary
Any cookies that may not be particularly necessary for the website to function and is used specifically to collect user personal data via analytics, ads, other embedded contents are termed as non-necessary cookies. It is mandatory to procure user consent prior to running these cookies on your website.
SAVE & ACCEPT